If you like the rest of us are asking the same question in your mind, which most of us have asked or wondered at some point. The question being, are gaming keyboards good for typing? Then you have landed in the right place, where we are going to find you the complete and conclusive answer.
Have you been in the typing scene for some time? Maybe you’ve been a writer or an accountant or are currently in any other profession that involves a lot of typing and screen-time. You might have noticed how the older membrane keyboards aren’t as comfortable as some other keyboard you’ve seen or used. Perhaps you saw it on a friend’s set-up or on a co-worker’s desk. Did it have lights?  Or maybe it had a bunch of buttons on the sides that you hadn’t seen or paid much attention to before?

Gaming keyboards are very different from the older membrane keyboards in that they’re typically mechanical, they can have RGB lighting, they might have dedicated macro and/or media keys. They’re much more programmable and customizable than membrane keyboards, are more responsive, and provide feedback on actuation.

If you are a writer or someone who uses a keyboard daily for relatively long periods, you might have wondered whether getting a gaming keyboard would improve your typing experience.

So are gaming keyboards good for typing?

Gaming keyboards that have clicky or tactile switches (explained below) are usually preferred for typing since they’re more solid, easy to use, and snappy. Some writers may also use linear switches since they’re lighter and quieter than the other two types. Gaming keyboards are generally better alternatives to other types of keyboards because of several additional features they bring to the table.

Let’s look into these features one by one.

Are gaming keyboards good for typing? Comparison with other keyboards 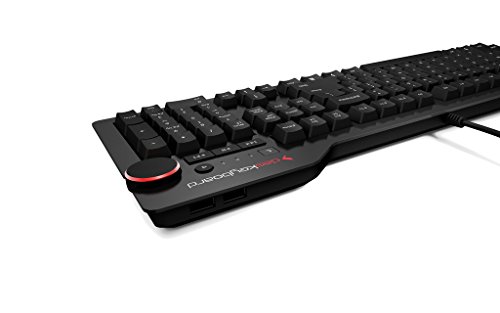 These advantages may already be available to you if you’re using a non-gaming mechanical keyboard. And you may already be typing fast since you’ve gotten accustomed to your keyboard, maybe you’re already using some Hotkeys, a little remapping here and there. There’s a small chance you’re doing all of those things and having a great time of it. But even in the off-chance of that being the case, a gaming keyboard lets you perform all these functions with even less effort. With dedicated macros and sometimes separate media keys, you can start skipping the routine tasks and start creating macros on-the-fly. You can remap your keyboard, create different layouts and different profiles with much more ease than on a non-gaming keyboard. A good gaming keyboard comes packed with all these features that you might find useful and with companion software (like G-hub from Logitech and Synapse from Razer), gaming keyboards can make your experience with them even more seamless, productive and efficient. Different switches and why they matter so much:

There are three main types of mechanical switches

The most popular type of mechanical switches is the Cherry MX series. Cherry is a German manufacturer and they started making these switches in the 1980s. The most popular type of tactile switches is the Cherry MX Brown. The Cherry MX Clear switch is pretty similar except it’s noticeably heavier to press so it’s better suited for heavier hands. These switches provide an intermediate experience between the linear and the clicky switches since this type of mechanical switches provides some audible and some tactile feedback. On the other hand, the most popular type of clicky switches is the Cherry MX Blue. The Cherry MX Green switch is quite similar to the Blue switch but it has a higher actuation force, just like the difference between the Browns and the Clears. These switches are quite loud and sound a bit like typewriters so people sitting next to you will easily be able to hear that you are typing. That’s one big drawback of these deliberate and loud switches. They make some noticeable noise. So if you’re someone that prefers to maintain a relatively non-disturbing environment, you might prefer Cherry MX Browns since they aren’t as loud and “clicky” as Cherry MX Blues but still provide significant feedback. Plus the Browns don’t tend to attract as many bricks from your next-door-neighbors to your windows as compared to the Blues. Who knows?… Maybe they just want to hear the ‘Blues’ better.

There are many different types of mechanical switches now, not just from Cherry but also from competitors like Logitech, Razer, and Kailh. The chart down below is meant to help you decide which key would suit you best although typically if you are a writer, the ideal option might not be very far from Cherry MX Browns and Cherry MX Blues. The Red and Black are lighter and don’t provide feedback on actuation so those might just be better left for gamers that prefer light-touch response and easy depression for faster reaction times. But people that prefer quieter keyboards with less effort in typing might find the Reds and the Blacks more appealing.

There are other features of keyboards that impact how the keystrokes feel or sound. This includes the general frame of the keyboard and whether the base is a closed one or an open one. An open base will help resonate the sound more which will provide louder feedback. A closed base will help contain or muffle the sound a bit.

Typically the most significant factor that affects how the keystrokes in a mechanical keyboard feel is the type of switch that is used. So even if you don’t get a physical demo of the keyboard that you want to get, getting to know which types of keys that keyboard uses should be helpful enough in giving you some idea of how the keystrokes on that keyboard will feel. You can check how different keys react by visiting a local store or get some idea of how they sound and feel from demo videos.
This should help answer the question of whether gaming keyboards are good enough for typing tasks.

Note: Only some of the variety from Cherry is mentioned here for the sake of conciseness. You can check out the whole line-up of cherry AND switches from other companies like Kailh, Logitech, and Razer here.

As mentioned above, certain types of mechanical switches i.e tactile and clicky provide some sort of feedback on actuation. Most, if not all gaming keyboards these days use mechanical switches. Some use the linear versions like the Cherry MX Reds, Blacks, or Silvers for speedy responses and feathery actuation. But for writers, these kinds of switches open the gates to typos. Just gliding over the wrong key can actuate keys on the Cherry MX Silver switches.

So the need for speed has a limit. After that, it just starts being inefficient. Keys like the Cherry MX Browns and the Blues seem to sit in the sweet spot for writers though. Since they provide feedback on actuation, a typist that’s settled in with either of these switches or switches similar to these (mentioned in the chart below) can avoid bottoming-out on each keystroke. “Bottoming-out” means the key traveling the entire travel available to it between its resting position and when it’s fully pressed. Avoiding the unnecessary effort of bottoming out can save your time and energy.

It’s not that hard to get accustomed to new gear, it can take a day or two but once you’re settled in, you probably wouldn’t regret switching to tactile or clicky mechanical keys.

Even if you do bottom out though, the Browns seem to be better at rebounding and provide a better typing experience than the relatively heavier Blues and Greens.

So we’ve mentioned a couple of gaming software up above. Logitech has G-hub, Razer has Synapse, Corsair has iCUE, and so on. You probably won’t find high-end companion software with non-high end peripherals. And gaming peripherals, like gaming phones and gaming PCs, take the place at the top of the line-up hierarchy. So gaming peripheral developing companies synergize or boost-up their products with their own companion software.

In gaming keyboards, this means the keyboard becomes much simpler to configure. The user interface has improved over the years like every other operating software and it’s become convenient and more efficient to configure your keyboard exactly how you want. Here’s a little list of things that companion software make easier:

Concluding the topic: Are gaming keyboards good for typing?

Gaming keyboards are great upgrades from membrane keyboards and a step forward from non-gaming mechanical keyboards. It’s a great idea to get yourself one and help your typing experience as well as your general productivity along. Hopefully, now you’re a little more convinced of what the answer to “Are gaming keyboards good for work?” is.

But don’t rush, keep in mind though that there’s a ton of different types of switches to choose from. Not just from Cherry but Logitech and Kailh etc. Look into what type of key switch suits you best. Maybe you prefer a heavy black to a brown switch and a green switch to a blue switch. Who knows, right? There’s a ton of variety out there and you should make sure you’re at least trying to get the most out of it. Decide which type of switch will suit you most, visit a store with the kind of variety you think is appropriate, and get your ideal working partner. Good luck!